A Constitution for Mars? 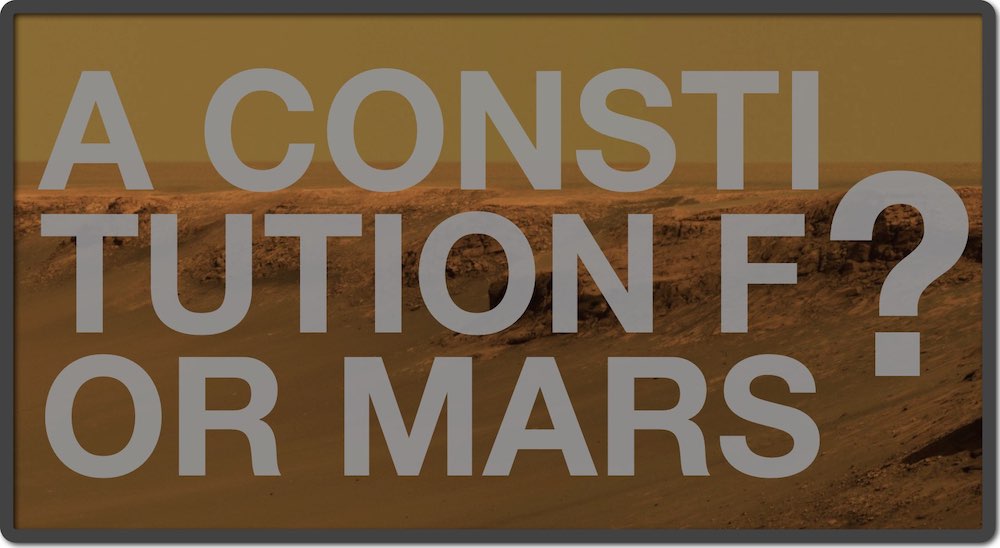 David Anderman in an interview at the Berkeley School of Law, 14.10.2020:
"I'm actually working on a constitution for Mars. No country can claim sovereignty over heavenly bodies"

"For Services provided on Mars, or in transit to Mars via Starship or other colonization spacecraft, the parties recognize Mars as a free planet and that no Earth-based government has authority or sovereignty over Martian activities. Accordingly, Disputes will be settled through self-governing principles, established in good faith, at the time of Martian settlement.“

As early as the Apollo program (1961-1972), there were initial NASA concepts to fly to Mars. In 1992 and again in 2004, the two U.S. presidents George H. W. Bush and George W. Bush presented programs for missions with passengers to the Moon and Mars.

From June 3, 2010 to November 4, 2011, the space agencies of Russia (ROSCOSMOS), Europe (ESA), and China (CNSA) jointly conducted the Mars-500 experiment near Moscow, which was designed to provide insights into group dynamics, person aptitude, behavioral responses to problems, and so on.

In 2013, Elon Musk's company SpaceX announced that it was working on a transport system to Mars. Since then, SpaceX has completed numerous development steps, which now hold out the prospect of Mars flights with around 100 people for 2026.
Amazon founder Jeff Bezos' company Blue Origin also announced in 2016 that it wanted to fly to the moon and Mars.

What do 52 experts have to say about SpaceX's intentions? 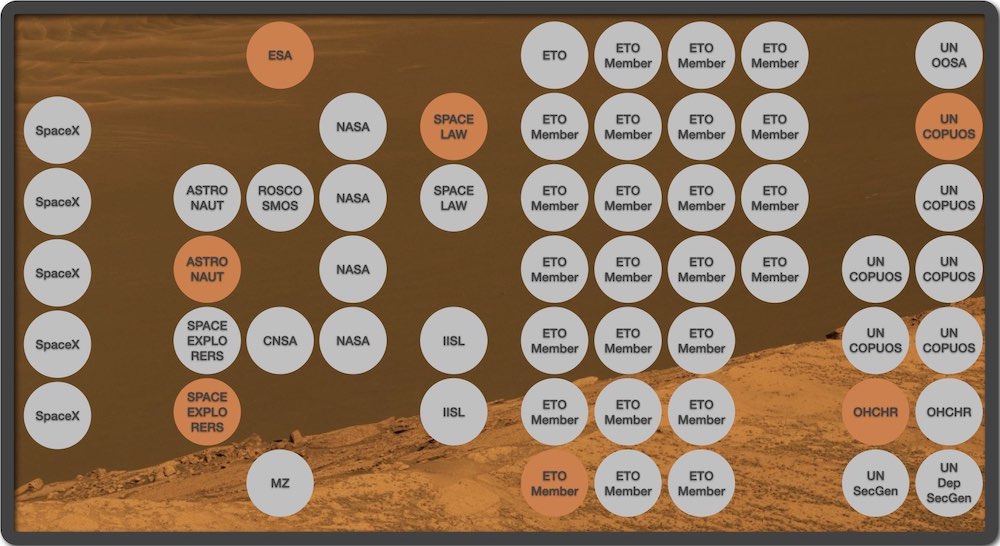 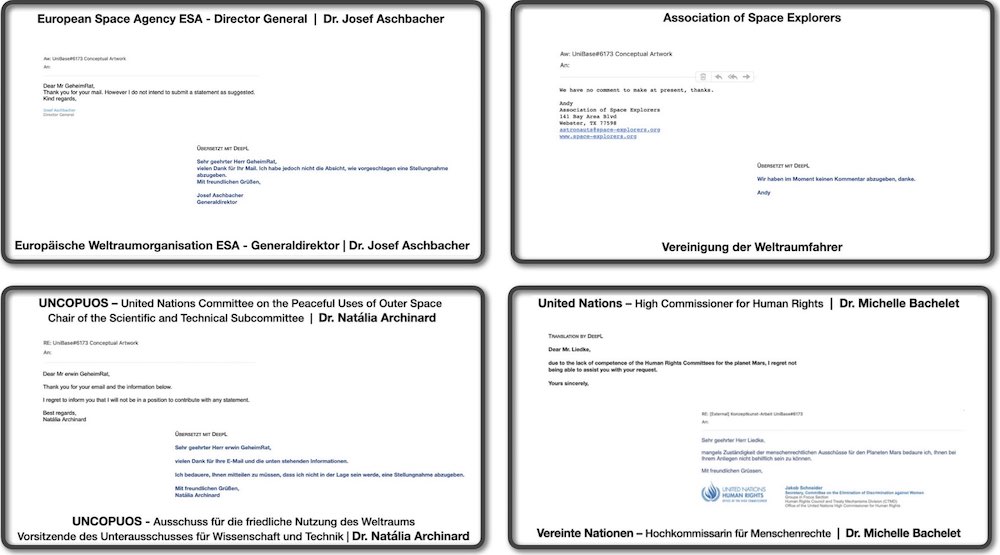 Director General | Dr. Josef Aschbacher:
"However I do not intend to submit a statement as suggested. “

Andy:
"We have no comment to make at present, thanks.“

Office of the High Commissioner for Human Rights | Jakob Schneider:
"...due to the lack of competence of the Human Rights Committees for the planet Mars, I regret not being able to assist you with your request.“ [translated]

Committee on the Peaceful Uses of Outer Space | Dr. Natalia Archinard:
"I regret to inform you that I will not be in a position to contribute with any statement.“ 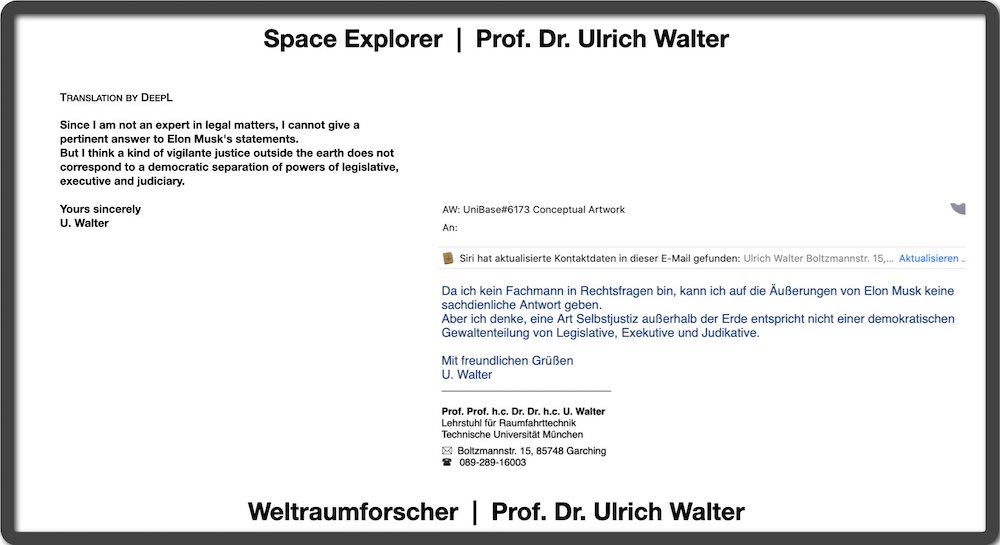 "Since I am not an expert in legal matters, I cannot give a pertinent answer to Elon Musk's statements. But I think a kind of vigilante justice outside the earth does not correspond to a democratic separation of powers of legislative, executive and judiciary.“ [translated] 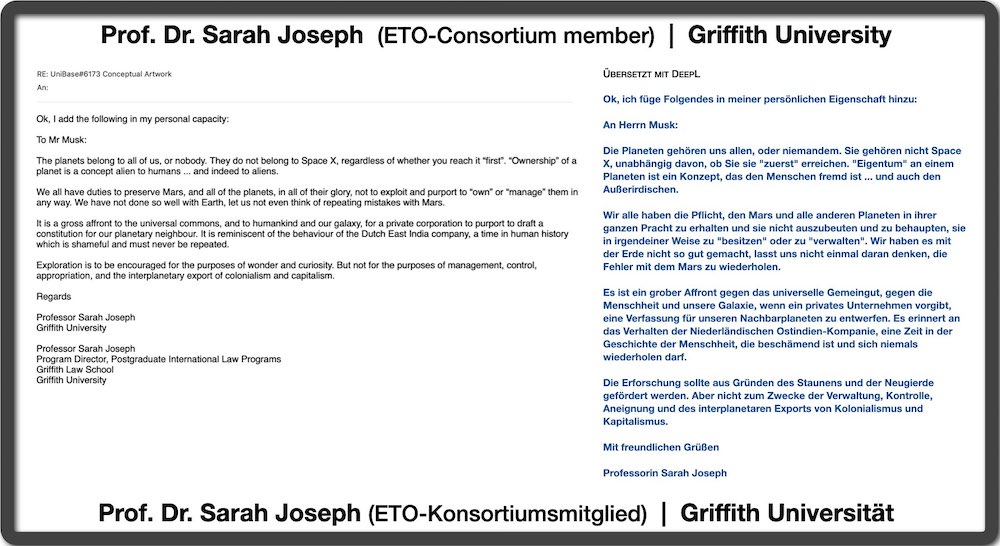 "[...] It is a gross affront to the universal commons, and to humankind and our galaxy, for a private corporation to purport to draft a constitution for our planetary neighbour. It is reminiscent of the behaviour of the Dutch East India company, a time in human history which is shameful and must never be repeated. [...]“ 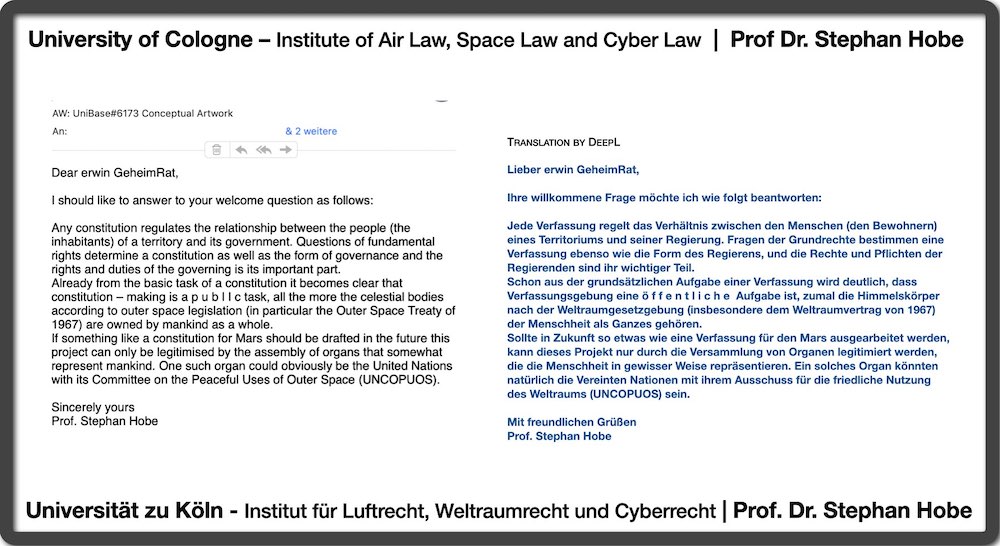 "Any constitution regulates the relationship between the people (the inhabitants) of a territory and its government. Questions of fundamental rights determine a constitution as well as the form of governance and the rights and duties of the governing is its important part.
Already from the basic task of a constitution it becomes clear that constitution – making is a p u b l I c task, all the more the celestial bodies according to outer space legislation (in particular the Outer Space Treaty of 1967) are owned by mankind as a whole.
If something like a constitution for Mars should be drafted in the future this project can only be legitimised by the assembly of organs that somewhat represent mankind. One such organ could obviously be the United Nations with its Committee on the Peaceful Uses of Outer Space (UNCOPUOS).“

What do SpaceX and Elon Musk say and what is in the space contract?   >>